All individuals are born equal in dignity and rights, and all form an integral part of humanity.

Refugees of African and Asian descent must be afforded the same access to employment as people of European descent, as this allows them to live with dignity and independence.

In recent weeks, the UK’s asylum and immigration rules have been inconsistent, favouring white European descent Ukrainians specifically. All refugees must be treated the same.

Dignified treatment means that self-contained accommodation must be provided to refugees. Sponsorship of named individual refugees should be by family members and registered community groups only. Safeguarding of vulnerable refugees cannot be adequately monitored when they are housed in rooms in owner-occupied homes of unrelated families.

UK-based refugee support groups must be able to make direct contact with individuals who are still displaced within regions of conflict in Africa and Western Asia, including in UNHCR camps.

If Ukrainian citizens and legal residents are to be issued with visas to travel to the UK without any refugee assessment or UNHCR documentation, then we call on the UK government to issue travel visas to citizens of Afghanistan, Syria, Iraq, Yemen, Sudan, and Eritrea who are fleeing war and the oppressive aftereffects of recent war in those countries.

In the interests of fair and just treatment of individuals who are facing personal persecution and would qualify for refugee status under the 1951 UN Convention and its 1967 Protocol, we call on the UK government to immediately introduce a system of Humanitarian visas, in order to permit people of African and Asian descent to travel to Britain safely and legally, in the same way that Ukrainians are being encouraged to do. 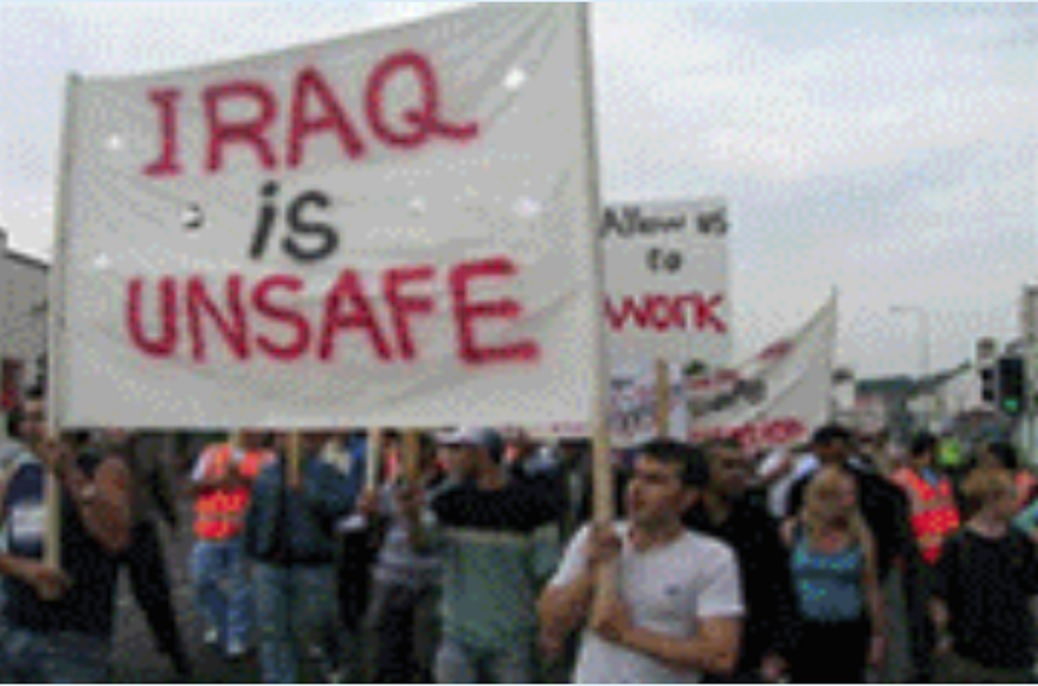 The International Federation of Iraqi Refugees (IFIR) directs the following letter to
the department of refugees of the United Nations High Commissioner for
Refugees (UNHCR) regarding the violence that is committed against refugees:

The International Federation of Iraqi Refugees directs this discontented letter to the UNHCR, and demands them to:

1. End immediately the policy of making refugees and war immigrants wait
in the camps and isolating them from civic life. They have to be transferred to a
safe place that all people deserve to have.

2. The UNHCR to force the countries that have made refugees wait in their
camps; protect them from the threat of racism and violence. Also, to provide
them with all their daily needs of food, clothes, health and school materials.

3. Make the governments of Europe, America, Australia, Canada, and all
others that made refugees wait in their camps, to give them asylum and to end
the situation that they live in now.

4. Shut down the camps of refugees has to be replaced with giving them
new shelters, giving them identities, and providing them with their needs in life.
And also, they have to be treated as their citizens equally.

5. The spouses, children, the relatives of Daish, and the disabled people and
seniors in Syria and Iraq camps should be treated as humans and given aid and
help to re-join society. Also, to implant the idea to love humanity in them
instead of violence.

6. To limit the tragedy of deaths in the seas and make the countries that refugees
cross through to immediately open their borders and to remove the barbed wires
in order not to leave refugees no option but to take danger roads via seas and
forests.

7. The governments of Europe should be forced to cancel their anti-refugee
agreement with Turkey to prevent refugees from entering and to repatriate them.

8. To make all countries that refugees cross through on their journey to Europe
track and find the disappeared immigrants that have been reported missing.

9. To immediately free all imprisoned immigrants held in detention Centres.

10. The West and Europe countries should avoid their interference policy and to
stop supporting the gangs, groups, and the oppressing countries that made their
people face war and social unrest. They should also cancel all their hidden
promises and agreements with them.

11. The UNHCR organization for refugees be activate in the areas and countries
that face wars and social conflicts. And also, to help the refugees and
immigrants and through this method to make the governments of Europe
recognize the rights of immigrants and refugees and to transfer them to a better,
safer place and area.

12. Provide the refugees with all they need through a planned method and to get
refugees integrated fast with the societies that they seek asylum in. And to
provide them with all individual, social and economic needs equally.

13. To officially recognize the political asylum seekers that escaped war,
nations and religious conflicts. And also, to help all those who fled due to their
gender and to start their new safe and happy life.

The International Federation of Iraqi Refugees (IFIR), will continue to struggle, in order to abolish: the policy of creating refugee camps where people are stranded for many years. We will continue to fight racism, gender disparity, and also will struggle to achieve equality for all refugees. And also, we ask all the refugee rights’ organizations support our letter and to force the UNHCR to respond to our demands laid out in this letter.

The Conference will be on Zoom

Look out for the email on Network Membership.